A downloadable game for Windows

Small experimental game made by Noa Calice aka Blackthornprod!

Oh man that ramps up from 10 to 1000 real fast. But it's so much fun. I would love full screen, and the ability to choose an object and build multiple of the item instead of having to go back over to the menu to choose new every time. Hotkeys to swap between items to build would be even better. But a pretty solid prototype and one I would sink hours into.

Very good, but you should expand it. If the humans behave more like RTS and build the defenses it will feel more immersive.

I am fully agreeing with the comments by others. You definitely need a multi-select feature because I was going crazy doing all the dragging and dropping. It gets super annoying if you don't grab the human.

It is a cool game idea. Could have been an entry to Ludum Dare 43 ;) Sound and graphics are as always top notch.

However, the game was not really feeling challenging to me. It was just annoying and felt like a task like dragging all files from one folder to another, but separately.

nice game! you could expand on this idea like after defeating the small enemies then there is HUUUGE one and greatGame!

This is an awesome little game. By far my favorite game that you've made so far. Please consider expanding upon this and releasing it as a full game.

Ok, so now that I've had the chance to play a decent amount I think I've formed a complete opinion. I definitely think a lot of things could be improved but that's to be expected with an early prototype. I genuinely enjoy playing this game and think it would be very good if expanded upon. I can't speak for anyone else but I know personally, if this were to be turned into a full polished game I would buy it on steam. Definitely already some good suggestions in the comments so possibly even implement some of that.

This prototype is amazing!!! Though theres lots to improve, here are my suggestions:

-The text should have the highest order in layer, because when i put down a bunch of spikes next to the altar, I couldnt see how many humans I still need to sacrifice

-When I first bought a human, I thought it places it in the world somewhere, so I purchased multiple of them, then realized that they have spawned behind the button(though it makes sense with the farms and spikes) This could be fixed so you cant put down humans in that ui section

-I know this is a big feature, but I would still like to see this in game: a turret that can shoot the monsters. It could have a small area of sight, and you could make it so that it costs multiple resources eg. 30 wood and 50 crystal

Please continue working on this project!

-dragging humans give me carpal tunnel/hotkey to sacrifice?

-human freak chamber too op/ voids the consequence of sacrificing.

So right now the first level(tutorial) feels like a proper level 1 while the second one was just level 1 on hard mode.

Suggestion: expand on it, add new monsters for new levels, new structures to deal with them. I REALLY like the idea of sacrificing. so maybe human sacrifice would get u a certain resource that lets you buy a certain structure to easily deal with a boss that comes out  fixed minutes after round starts.(lets players decide to more easily deal with boss, or take the risk and complete faster.)

Thanks for the awesome suggestions Eean :)!

I enjoyed the game. Though figuring out what the black monsters and purple stars do is part of the fun, I would really suggest designing them in a way that communicates their functions (Didn't realize the monsters could destroy the altar and lost all my progress. Then I felt frustrated and did not think I could do anything to stop the monsters until way later when I tried out the purple star).

Repeatedly dragging humans to the altar felt like a lot of busy work, especially in later levels. The players should simply win by reaching a certain population. I like the trade-offs for deciding to collect different kinds of resources, but the consequences for each decision did not feel significant enough. Lastly, I'd be happy to see more player agency since dragging stuffs around gets tiring after a short while. Giving the player the ability to create an optimized, automated system would be way more fun. (Not sure how you'd do that though. Maybe add in something like the programmable worker bees from Slime Rancher that automatically take humans from one specific location to another. The players can then focus on combating monsters later on in the game.)

Really glad you enjoyed this little prototype, thanks for the feedback Boris :)!

its a bit monotone

Gets boring after a while, it's kinda of repetitive.

great game, had so much fun playing it, and i think you should expand on it and make it a full fledged game

Thanks mate :)! I'll think about doing that! 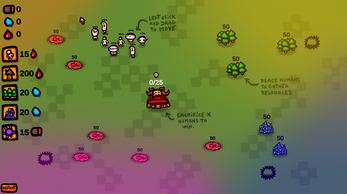