This small game was made in 2 and a half days to celebrate Halloween :} !!

MOVE and DOUBLE JUMP with the ARROW KEYS or WASD KEYS !

MOVE your MOUSE to reveal darker parts of the world...

SUPPORT ME on PATREON : https://www.patreon.com/blackthornprod

well i started i screamed from the sound

This game well scares me but this is a great game.

i really enjoy this Game

The sound effects are so loud compared to the music! It startled me a lot!

it's the best game of the world

Who was the music made by?

When you're mouse is broken so you try to play with your laptop's track pad...

you're not the only one pal.

You really aren't the only one

i cant pass the first one help?

You can tap the jump button twice to double jump

It helps to not die

help me is there a full screen

Yes there is :) ! Just take a look at the bottom right corner of the screen ^^

Great game Noa! Saw the concept in your video and knew I had to check it out. The jump scares actually got me too...

This game is so beautifully sad, amazing job!

I enjoyed this game.
idea is really enjoyable.

Great game with a really cool idea, I love the artwork and the music. I thought that the sound effects were a little too loud compared to the music, and some of the levels were very frusturating, but it is still a very fun game.

fun game, The level design was a, bit frustrating at times and i really think you could have done more with the origional murduer (screen 2) and maybe added a mechanic where he would follow you in inpredicible was, if you weren't keeping him visible. But overall very good concept.

cool stuff. The music is awesome

This game is the best thing I have ever seen especially for such a short amount of time! I love the revealing double-world mechanic and how smoothly it works. The music and audio is unbelievable and fits extremely well! The mechanics are almost mesmerizing I spent like 5 minutes just looking at the title screen. I love the attention to detail with the title and backdrop splatter when hovered over as well as the contrast between realms.

Very artistic game! i liked the idea of two different worlds and how you mix them!

FANTASTIC!! Worked very well as a WebGL build too :)

I just started trying to make WebGL builds, but they always seem to have issues, would love to hear you had any tips or tricks to making a proper WebGL build!

Awsome Noa!! you never fail to surprise us!.. matching layer masks like this must've been a challange.

The sounds were pretty scary ;) You made a good use of the theme Halloween and the main mechanic was nice. I was a a bit scared playing your game :D

Your graphics are simple but always very nice and it goes well with the ambience.

Good Game ! And well done for your videos too ;)

Is there secret lore in this? :thonking:

Thanks a lot for pointing that out :) ! I'll fix it straight away !

Really amazing game! love the music and amazing mechanic. And of course the art is phenomenal.

Thanks so much mate for the kind words :) !

Really nice game. It's pretty spooky, and I love the mechanic. It was especially interesting when I noticed elements of the dark world bleeding into the normal world. That was a very intriguing moment that hooked me and I wanted to find out more.

The double jump isn't tutorialized well. Despite having read it, I had already forgotten about it at the first jump. I don't tend to remember things I read. So several times I died on the spike trap trying to get it in a single jump, which had me thinking "Oh.. This must be one of 'those' types of games." Personally I think it'd be better to introduce the double jump 1) after the player understands and has played around with the single jump, and 2) in a setup where they're not in any danger. Like with some terrain jumping.

There's a bit where the terrain drops off into a spike pit. But there's no visual difference between the hole and the terrain that's safe to walk on, other than the spikes so it's hard to see. Personally I felt a little cheated because of it, but that's a bit of personal taste.

Overall great game. I would love to see this concept expanded upon. This has inspired me to play around with masking in Godot.

didn't even start playing, and the hype is overload <3

Nice game Noa! Is it a bug that you can jump infinitely? Did you just tell people to double jump but you actually didn't code in ground detection? It would be funny to see how many people don't even notice.

i didn't even notice lol

Thanks a lot for pointing out that pesky bug, I'll fix it straight away :) !

Very interesting, the game creates an incredible atmosphere! The player felt amazing to control with the animation. 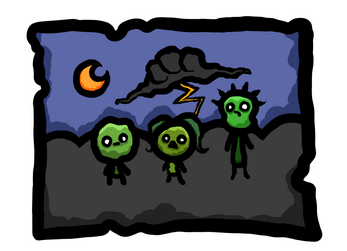 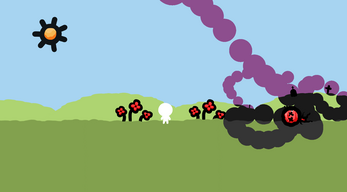