I finished the entire game(ragequit on the first time playing it tho).Great game but i wish there was something at the end,like some cutscene,congratulation,or maybe even a jumpscare(like many suggested)

really cool game and really challenging would you like to play my game at https://keshav1223232.itch.io/rollingmaniac

This Is A Rage Game @Blackthornprod Games

ngl dobby is kinda a prick

Nice game, really enjoyed playing it. I felt more comfortable with the Ultra levels because the speed on the Basic is a little to slow for my taste. I was often cutting the corners too fast. Level 8 was the worst :D

This was really fun ! but hard at the same time , I played it with my tablet pen so I think I cheated a little :) , also great music man I like it

Really nice game, although kinda hard. I finished all the levels with basic difficulty, now I'm on the fifth ultra level.

Just make a build for android too.

Was disappointed about the ending... was expecting some monster to pop out like the prank one... tsssk tsk tsk

Sorry to hear that ;D! Everyone is talking about a maze like horror game but I don't think I've ever played it. What's it called?

PS: Don't forget to play with your headset on :) and if it's too small try to zoom in : Ctrl +

I havnt played through all levels yet, i just finished the spira one, and im enjoying it. but theres this wierd illusion that makes it feel like your character/cursor is offset. its because the cursor is 2d while the map is 3D the offset illusion happens when you put the cursor on top of the walls, which in certain angles can make it feel like yourcursor is on top of a wall above your character, but is not. I tested and its not a bug, its just an illusion that might only be affecting me XD

edit, just finished through ultra, what about the other levels? i was looking forward to them D:

It feels like it's a pretty good game! Dobby's commands are really well done, however I was not able to pass the third level of ultra, so I can't review the level design.

I hope you have a good day and keep staying awesome!

Amazing! I have a question: what type of colliders did you use?

Also, I really like the way you dealt with Dobby just moving up and down when at the mouse cursor's pos!

Loved this game. Its controls were really fun to interact with, and the overall game feel was on point (with the screen shakes, sounds, particles effects, trails, etc).

One small thing is that I did not realize at first that the thing that moves (I'll call it Dobby) would continue following my mouse cursor even if I let go of the mouse key. My poor hand suffered from having to keep the mouse pressed until I reached the goal so I was internally screaming a lot ;) Also I didn't know that Dobby would not move past the mouse cursor. I guess you can communicate how Dobby's following mechanic works by letting the player start each level by placing their cursor over Dobby (instead of by clicking).

One thing worth noting: I probably wasn't guiding Dobby the way you intended, but when I first got to the level with sharp turns, I would wait for Dobby to arrive at a corner then suddenly swipe my mouse to make it turn. That felt good! I felt as if I was a wizard manipulating a projectile's trajectory telekinetically. I don't think this game would necessarily benefit from having a narrative, but you could certainly use this game's mechanics in some other large-scale wizard-based project. (I'd also tweak the controls to emphasize a tossing-projectile sensation)

You probably intended this, but I could skip a couple levels by going around the maze. Some levels were a bit too long for comfort, but I know that's part of the challenge. Anyhow, loved the idea of this game. Keep on being awesome!

Thanks a lot for the great feedback again Boris! Dobby also sends his regards. :)

After playing the first level I'm really happy to see  game where you stepped out of your comfort zone, good job! 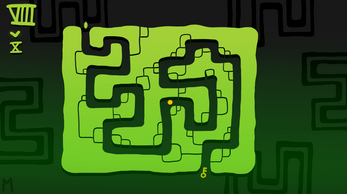 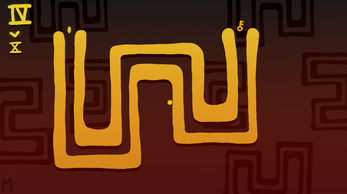 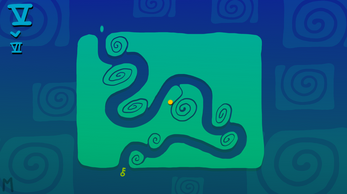