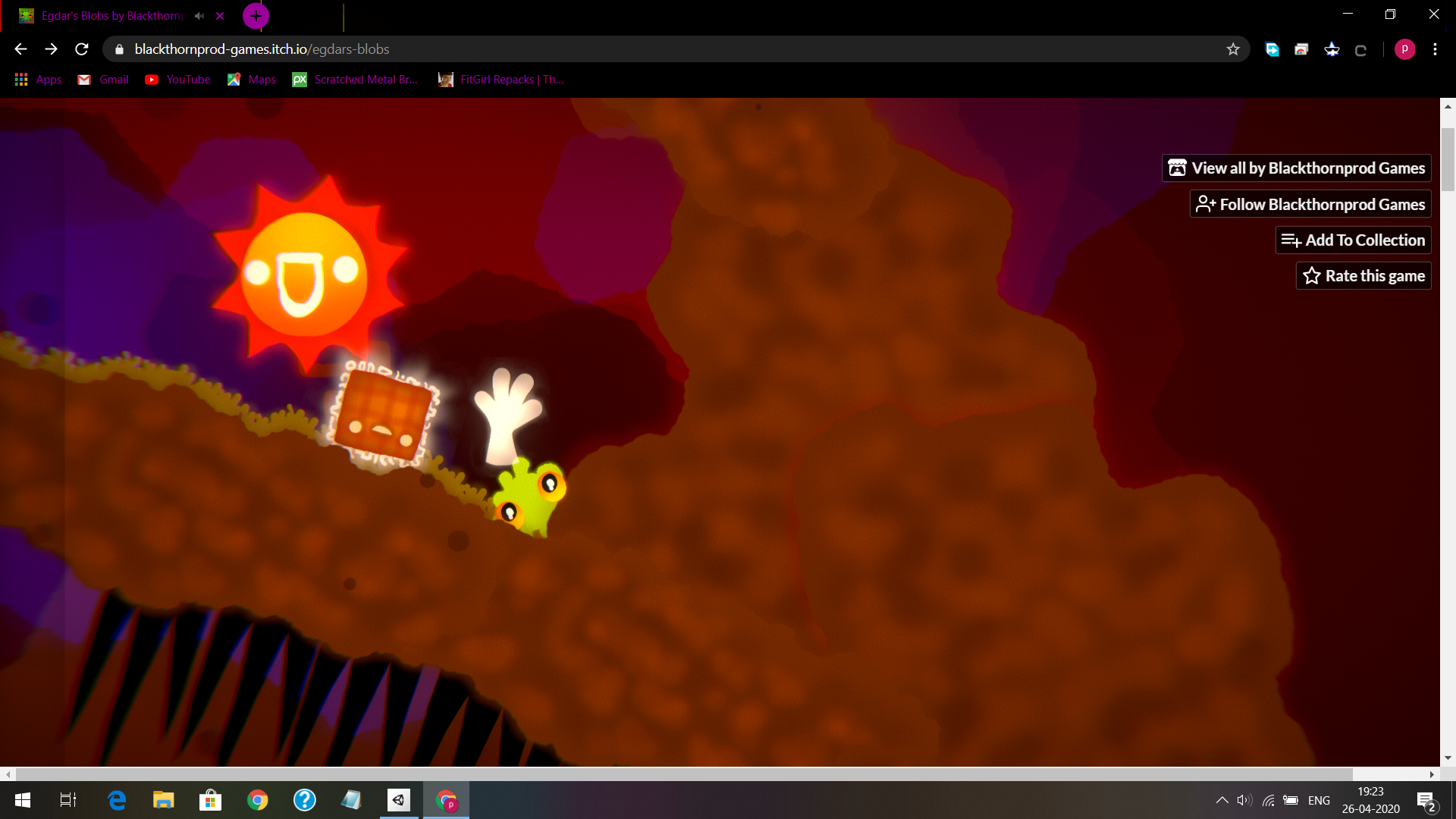 Good game.The only problem it has are the controls.You might need to drag a pltaform but SIKE,the player is way too far,so you can't click on the platform,and so he falls to his death,without even giving a chance to click on the platform.I'd suggest making it a big,still screen without camera movement,or make the camera be focused more on platforms,and showing where character is with a bubble,or something

Great game! I love the funny physics and the Awesome art. but I think the game is to hard and was stuck on level 2 for a long time . But otherwise It's perfect!

Really fun game! Great sound effects! My brother and I ( 7 and 20 yrs ) had a blast playing it. We didn't quite finish to the end but we got to level 7. The "Squee" sound is awesome as others have mentioned! I really enjoyed the "world manipulation mechanic".. very polished, easy to use, and predictable!

Awesome game! I wish the camera was a bit snappier but otherwise it felt great to move the slurpy around.

I'm really loving this game, tho i would have made the camera a bit more distant, because it makes handling the various gizmos a lot more difficult ,especially because the angle of the variuos things depend on the positon of the pointer, which makes thing really go crazy when the object moves out of view.

when the slurpy went "squee" i felt that

Reply
The Captain Moo2 years ago

This game is terrific, I would happily play this again. The levels were increasing in difficultly but still possible. Was polished and had a good length. I think you should make a sequel or make more levels because I loved it.

So nice! Love the level of polish on everything. I found it really challenging to play, particularly with the camera moving around, but still had a lot of fun :)

This game was very difficult and on Lv 5, I didn't like the "Gear, Platform, gear" thing, and it killed me the first time. Other than that, Amazing game!

Hey Noa and Jonas. I must say, you really did a very good job with this game. It feels great just interacting alone! Solid game, not overwhelmingly difficult. Great mood, music and art.

And btw I really like your videos on Youtube. They teached me some things I didn't know yet about game design. I used this knowledge to implement in my first Ludum Dare entry "The Harmless Prison Escape", a puzzle game. Especially Jonas videos about game design and puzzle design helped me creating a better game for LD46.

So thank you very much for spreading your view and knowledge on game design!

Can't wait for the video of the making of this game.

Very nice game! I especially like the intro and music. My only complaint is that it's rather hard to move the environment sometimes, due to the pieces going off screen when the slurpie goes too high.

Amazing game do you will make a tut about it?

This is good! Honestly I wouldn't say the best, but still it's really good for something that was only made in a few days. I haven't made it past Experiment 7, and I definitely agree with others on some balancing issues. There are some bugs I've seen while playing this...

The camera sometimes is slow to follow the blob and I can't see it at all, say if I were to launch it upwards from the movable flippers, leading to a death.

Also they move in such a way that I didn't intend; sometimes I'm moving it a bit clockwise and it just goes in the opposite direction.

...But hey, error is everywhere, right? You guys still did a great job! Keep up the good work Noa and Jonas!

This game is pretty good. The art is top-notch as always, Noa! I especially like the foreground pipes, which just adds that little bit extra that makes the world so cool!!

I also sorta like experiment 7 style experiments, if they could be a bit easier.

I totally understand the balance issues, having made a very questionably balanced game myself. Here it is, if you want: https://ldjam.com/events/ludum-dare/46/squared-defense

Really nice music, art, sound, idea! For menly problem is, the game's difficulty rises quickly, at least for me. Didn't make it past experiment 7. I find it really hard to aim with my cursor for some reason...

Regardless of the difficulty, I did quite enjoy the game. Reminds me of Will You Snail - you don't complete a level until you suddenly make one precise jump; the completion is just so satisfying after the struggle.

Come to think of it - I only just realized that I take the role of Edgar, and face his struggles with the Slurpies (I am pretty dumb). I'll bet it's hard for Edgar to conduct these "experiments" without his Slurpies dying so many times... it's kinda depressing.

You and Jonas did really well. The game is beautiful. Since this was created in only 2 or 3 days, I guess I can expect some rather high difficulty or a really annoying bug or something; the whole point of the game is to stay around the theme of LD!

wow that was a long comment, sorry for that.

Can we get the link to the LD page to rate it please?

Good point! Here it is :) : https://ldjam.com/events/ludum-dare/46/egdars-blobs

i love throwing the blob all over the place

arghh its s o sad when the blobs die

i hate flinging em into the spikes

urgh i almost finished level 9 until i dropped the block

I like the idea itself, but for me the platforms are too sensitive, when you barely move your mouse and it rotates almost 270 degrees.  But shooting Slurpies to the  air is very enjoyable itself, so who cares XD

Edit: Just finished the entire game and the 5 experiment was the most difficult to me, because of the difficulty to control the platforms to rotate them as I want them. You need to move your mouse very slowly to manage to control it, but still, there are situation where you'll move it a little bit too strong and you slurp flies away. And here is the second problem: Camera. When your slurp moves quickly, camera follows is too slow and it's difficult to see, what to expect below or next to it. So maybe camera follow speed should be based on move speed of slurpie itself or try to find balance between cam follow and slurpie max speed to prevent situations like this.

Some people said, that they were stuck on 7 experiment and i understand why. It's all about controls, which i mentioned above(even before edit).  That's the biggest issue of gameplay, but I know, it's a jam game and the time restriction  so it's sometimes difficult to get everything right.

Anyway, I liked it despite of that annoying controls and camera, which was following the slurpie too slow when it was moving fast. Shooting the green characters in the air and watching them fly to the sky  is enjoyable enough,  but anyway,  in terms of graphics and sound effects it's polished, so it makes that small world alive

i love it too